I figured it was time to give you guys an update on our IVF journey. It’s been quite the rollercoaster…and I have been trying to figure out the “right” time for me to write about what has happened the past several weeks. With the help and encouragement of someone I’ve gotten close to who was also going through IVF the same time we did, I decided to go for it. Hoping and praying that this will be healing for me to write about it.

As you all know, we had 17 eggs retrieved and 14 fertilized. It was determined that I would have a day 5 transfer. On November 18, 2014 we arrived at the clinic at 10am for the transfer of our embryo(s). They had us (my husband & I) in the transfer room which was SO hot because the doctor said the embryos like it warm. My husband & I were dead set on only transferring one embryo because of the risk of multiples, etc. We were completely caught off guard when our doctor came in and strongly suggested that we transfer TWO embryos. With transferring two, we still had six to see if they would make it to freezing, but it was too soon to see if any would make it. They left the room so Matt & I could talk cause we honestly thought for sure we would be doing one. It was always in the back of my mind that in the end, I would listen to the doctors recommendation regarding the number to transfer. It was an emotional decision, but we did decide to transfer two.

Here is a picture of our 2 embryos that we transferred 🙂 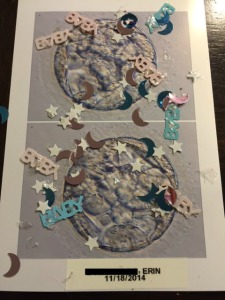 We then had a 9 day wait until blood draw to test for pregnancy. If you can do the math, that meant on Thanksgiving we would find out if we were pregnant or not. The 9 days went pretty quick, and on Thanksgiving morning I woke up at 4:30am, to leave by 5:30am, to arrive at the clinic at 6:30am before heading to Wisconsin for Thanksgiving with my family. I was SO nervous that day. SO NERVOUS. I had no clue what to think or how to feel. My husband was already in WI deer hunting and I wouldn’t be with him when the clinic called me with results.

It was 12:43pm on November 27, 2014 when the clinic FINALLY called. It felt like it was days before they called. I didn’t “cheat” during the 9 days to take a pregnancy test – I was too scared. The nurse on the phone told me the news I wasn’t ready for…WE WERE PREGNANT. We were finally pregnant. After over 2 years of trying, countless medicated cycles, IUIs, and one cycle of IVF…we were finally pregnant. Tears were streaming down my face as the nurse kept talking and telling me stay on my meds cause it was very important. I can hardly remember what she said because I was so excited. My HCG beta was 55. They like to see it at 50 or higher so I was thrilled with that number.

I sent Matt a picture of our youngest dog with the words, “Hey dad, I’m gonna be a big brother” to let him know we were PREGNANT! He called me right away and couldn’t even get words out. He was so excited and also emotional. I’ll NEVER forget that day.

For the next few weeks, we had to be at the clinic for blood draw for them to test my HCG levels and progesterone levels. They wanted to make sure my HCG was doubling like it should and my progesterone levels were great. I was on progesterone oil shots every night. It was an 1 1/2″ needle that had to go in my “back side” — extremely painful. I remember one night where it hurt so bad I begged Matt to take the needle out before he was done and was crying in pain.

At about six weeks pregnant, at 4:30am, I woke up with really bad cramps. Scared, I went to the bathroom and I did have some red blood. It wasn’t much but I still immediately thought the worst – I was miscarrying. I called the clinic when they opened and my doctor told me spotting was normal & that unless I was soaking two pads in an hour, to go to the ER. I had no more blood at all, so I was starting to feel like everything was going to be okay.

At about seven weeks pregnant, on my 30th birthday (December 18), we had our first ultrasound. I was so nervous. Part of me was excited to be able to see our baby (or babies) and the heartbeat. But part of me had a feeling it was going to be bad news.

I knew the moment our doctor showed us the sac on the ultrasound screen that we weren’t pregnant. It was hard to see anything in there and we should have been able to see at least a little something. She ended up finding our baby but was only measuring at six weeks, with no heartbeat. We were no longer pregnant. Also, a day I will never forget.

The rest of the day (and days after that) were a blur to me. The tears never stopped, the sadness still hasn’t left, and a day hasn’t gone by since that I haven’t thought about it. I don’t think the pain will ever go away and that’s okay.

My husband and I are blessed beyond words with the amount of support we have received from family + friends. Absolutely amazing. The constant reaching out to check on us, see if we needed anything, or just telling us they were praying for us.

My cousin gave me this beautiful, framed print that I put on my nightstand as a constant reminder that we should “focus on the good” – I absolutely love it. Because honestly, to make it day to day, that’s what we need to do. Focus on the good. We’ve been through hell, became the happiest we had ever been, then suffered a major loss.

I try to focus on the positives — I got pregnant (for the first time in my life, so now I know it’s possible) and it has brought my husband & I even closer than we already were. He is my rock. He’s my safety. I can’t even put it into words. I’m so blessed and don’t know what I would do without him. I can’t thank him enough for everything. He’s stayed so strong for me and continues to do so.

He bought me this bracelet because it’s what I continue to tell myself when this journey seems too hard to continue:

We also bought this little stocking, since it was around Christmas time, as a remembrance of Baby B. 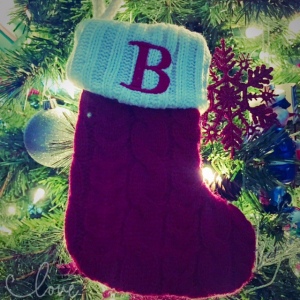 We do have three frozen embryos that are great quality so we are praying for success in the future. It will be a bit before we can try again, but continue to pray for our journey to three.

I apologize if this post has been all over the place. It’s been hard to find the words or put into words how I have been feeling about our loss.

We appreciate all of your prayers and kind words and would love it if you could continue to pray our continued journey to three.

We are sad everyday, but optimistic for what the future holds for us. 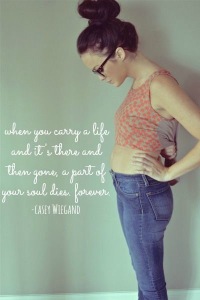 Love to you all. XO.